42: Trump vs Biden: The Tale of Opposite Political Branding 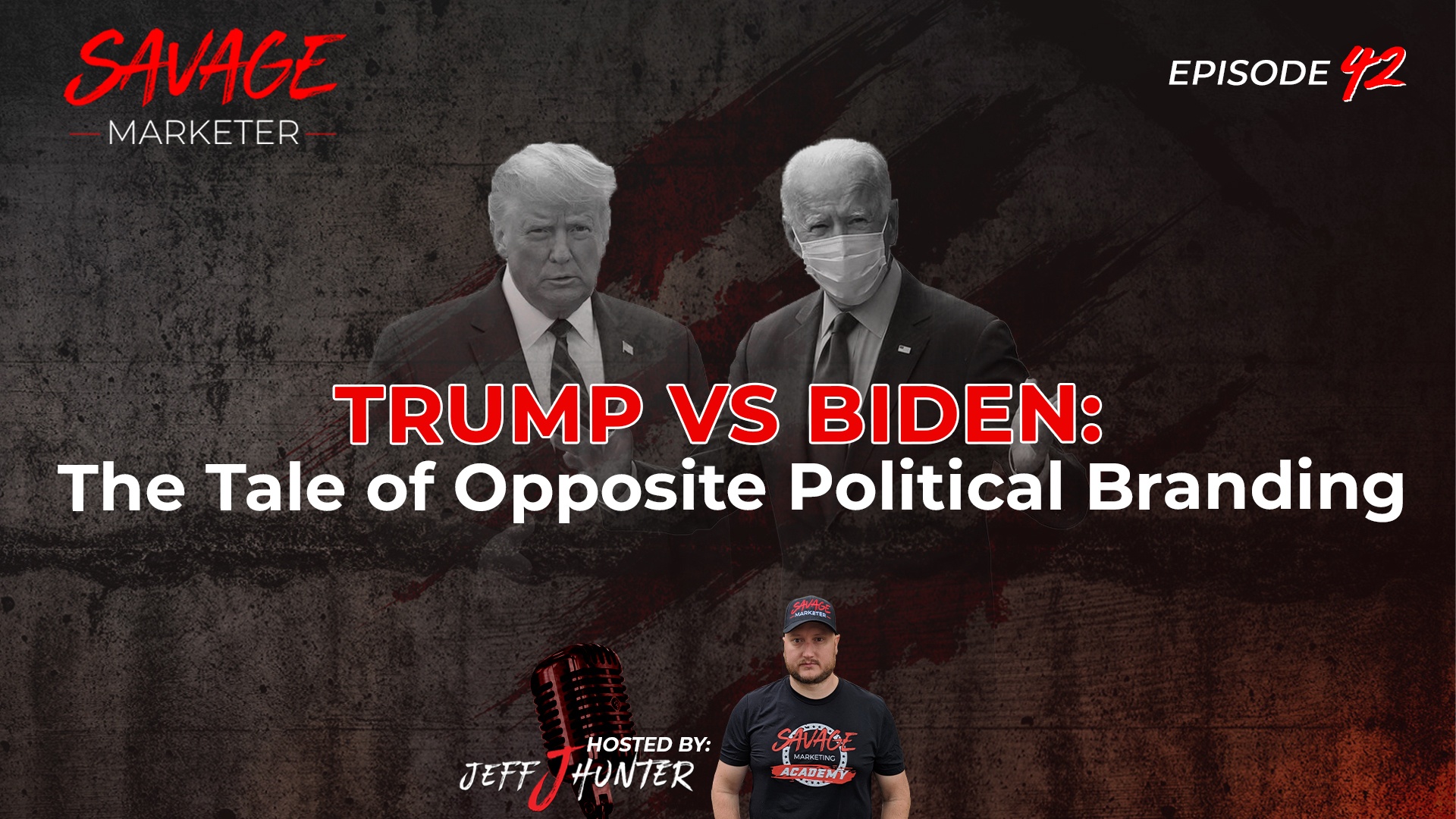 Hold on to your britches, Savages, because today we’re going to analyze the marketing behind both the Trump and the Biden campaigns. Now, just like anyone else, I don't know what the outcome of the election will be — So I won't make any predictions. Instead, I'm going to break down some of the angles, branding, and marketing strategy at play between our two major presidential candidates.

First of all, let’s consider the rallies. If you haven't been keeping up to date, I want to paint a mental picture of what these rallies look like on their respective sides — Because they couldn't be more different.

Look at Trump’s rallies. In a grandiose spectacle, he comes in on a helicopter that lands right behind the stage. The horde of his supporters stands butthole-to-belly button, thousands deep — Some with masks on, others with masks off. They cheer, scream, and yell, as deafening music plays for the kind of brash pomp and circumstance we’ve all come to expect from Donald Trump’s political image. It’s truly a sight to behold.

However, Biden’s rallies offer their own jarring visuals, of equal and opposite nature. He walks briskly down a stairway, no one around him. The event probably has 100 or fewer people, almost all of whom are at least six to eight feet apart. They sit in thick, white, perfect circles painted on the ground, mostly one-by-one, but with a few couples dispersed who sit together. Biden walks on stage wearing his mask — A stark difference from maskless Trump and company.

These highly contrasting images are why I love what I’m sharing today, and what I’ll be sharing on the next (short) episode of the Savage Marketer Podcast. Looking at these two vastly different approaches, we see two distinctive political brands:

Trump is a rebel, outsider, and maverick who can’t be held down; clearly what his base has connected with.  Biden is cautious, controlled, and scripted. He plays by the book and by the rules. The image of his rally is incredibly clean, disciplined, and almost academic, adhering closely to each and every social distancing guideline. This approach appeals strongly to his respective follower base as well.

Then there’s the matter of discourse Trump and Biden use against each other. Like their rallies, their rhetoric is also vastly different. Biden says Trump is reckless, crazy, and totally out of control; something that has cost hundreds of thousands of Americans their lives. But Trump claimed something incredibly interesting (and arguably more optimistic) during the second debate, saying that we can’t all “hide in our basements forever” in handling the pandemic. What’s clear is that Biden comes from a far more traditional political school of thought — While Trump arms himself with insults and emotional appeals.

On the topic of emotional appeals, think about the emotions that are stirred inside you when you consider each campaign. Regardless of which candidate you favor, the truth is that your emotional response is the result of an incredible amount of effort each candidate has put into their personal brand. You see, for most people, perception is reality. Which candidate appeals most to you? Which of these rallies do you feel is ‘right’? Thousands of Trump supporters shoulder-to-shoulder, or a meticulously crafted, cautious, highly-regulated event?

We’re in for such an interesting election because it’s these two polar-opposite camps pitted against each each other. Is the majority of America looking for four more uncontrollable, wild, rambunctious years? Or are we seeking order, deliberate action, and traditional diplomacy? Are we outrageous rebels, or civil citizens willing to stand in line?

Regardless of your political alignment, please join us for our next episode of Savage Marketer this Monday, November 2nd. Everything will be up for discussion, and if you haven’t yet, feel free to join the Savage Marketer Facebook group! We’d love you to introduce yourself and engage in discussion about which candidate you think will win, and whose branding you think is more effective.

Trump vs Biden: The Tale of Opposite Political Branding 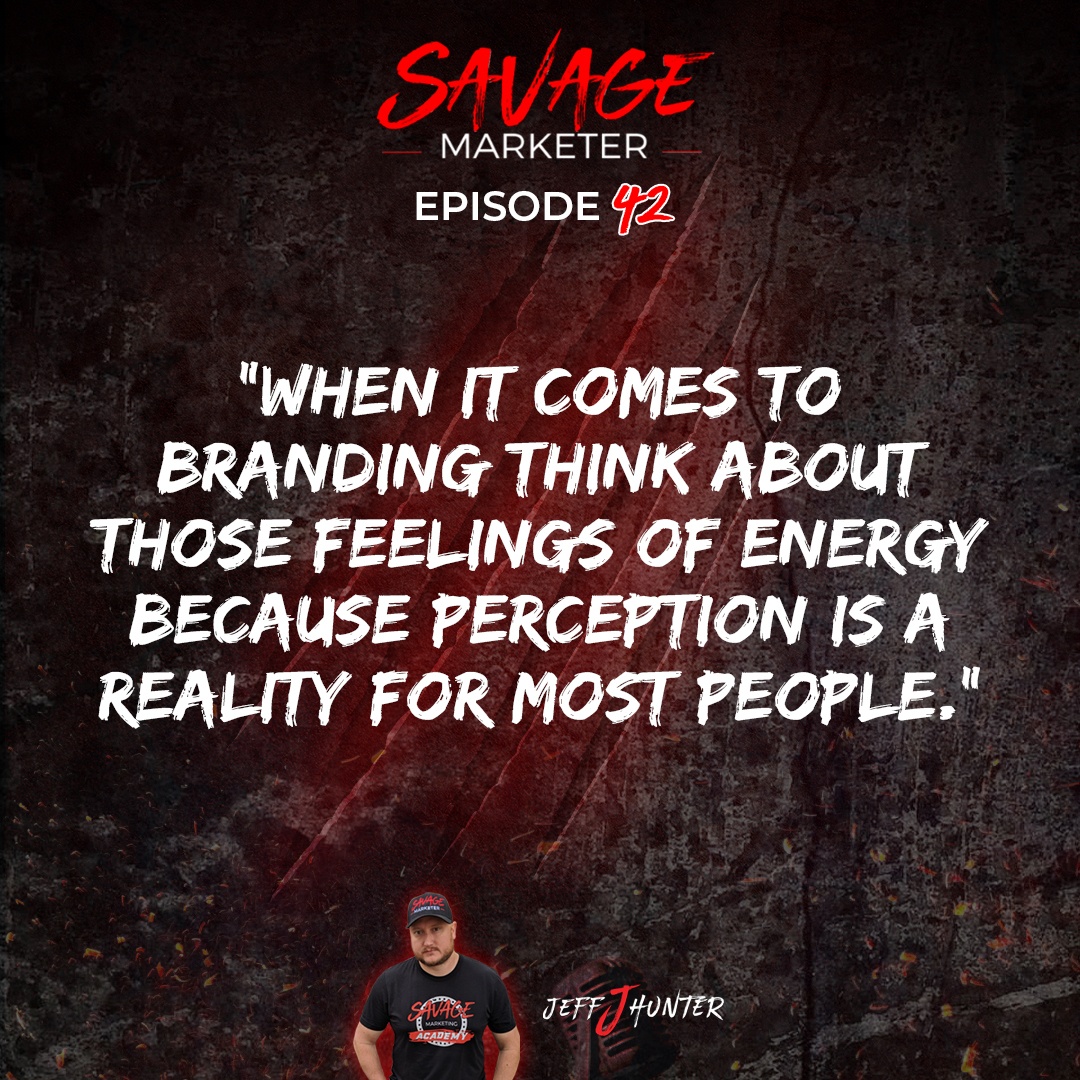 Trump vs Biden: The Tale of Opposite Political Branding

[05:45] The importance of branding perception.

[7:54]  The branding decision America must make.

[9:13] Join the discussion about today’s episode in The Savage Marketer FB group.

Our favorite part of recording a live podcast each week is participating in the great conversations that happen on our live chat, on social media, and in our comments section.

Join our community at:  https://www.facebook.com/groups/savagemarketers

No votes so far! Be the first to rate this episode.

We are sorry that this episode was not useful for you!

We want to make sure every episode is Savage!

Tell us why you felt this wasn't savage!

About the Author Jeff J Hunter

Host of the Savage Marketer Podcast. Jeff builds personal brands for Founders & CEOs who are ready to leverage their business achievements to become influencers in their category. Creator of the CORE Branding Method and Founder of BrandedMedia.io which is a 50+ team Branding Agency. Featured on Influencive, The Today Show, Forbes, Inc, ABC & CBS. Host of the Savage Marketer Podcast.

Season 2 | Episode 5: How A Creative Blacksmith Doubled His Prices After Going Viral On Social Media with Max Randolph

Season 2 | Episode 4: How A Famous Photographer Got Cancelled After Taking a Job from Trump with Gene Ho

45: Marketing During the Pandemic: Winners & Losers

43: How To Create A “Mini-Course” To Grow Your Business with Kenny Barnwell

Previous Post 41: How To Dominate The SERPs For Your Brand Name with Jason Barnard Next Post 43: How To Create A “Mini-Course” To Grow Your Business with Kenny Barnwell

1: Branding Afflictions: 9 Things to Never Do with your Marketing with Doug Harrison